I had first started using MSFS in the late 80’s and was immediately hooked, trying to take-off and land at Meigs Field near Chicago. Below is an image from Wikipedia (click link for info) showing FS4. I spent many hours flying and my log book was filling up.

When I started using Air Hauler I setup my first company  ‘Gregory Air Cargo‘ I had no experience how a company was built but soon got into the workings. I started purchasing single aircraft until I had a fleet of 12 Cessna 172 aircraft.
Below is an image from those early days. Many many flights took place all over Europe with the idea of earning some cash and not go bankrupt. I started to learn about salaries, hiring pilots, making sure the various aircraft ‘checks’ were completed, fixing faults and allocating jobs to crews. Really enjoyed it.

As I progressed it was inevitable that I moved on with other aircraft and this included such aircraft as the magnificent Locheed Super Constellation ‘Connie’ which was a treat to fly. An example of my aircraft at Edinburgh are shown below: 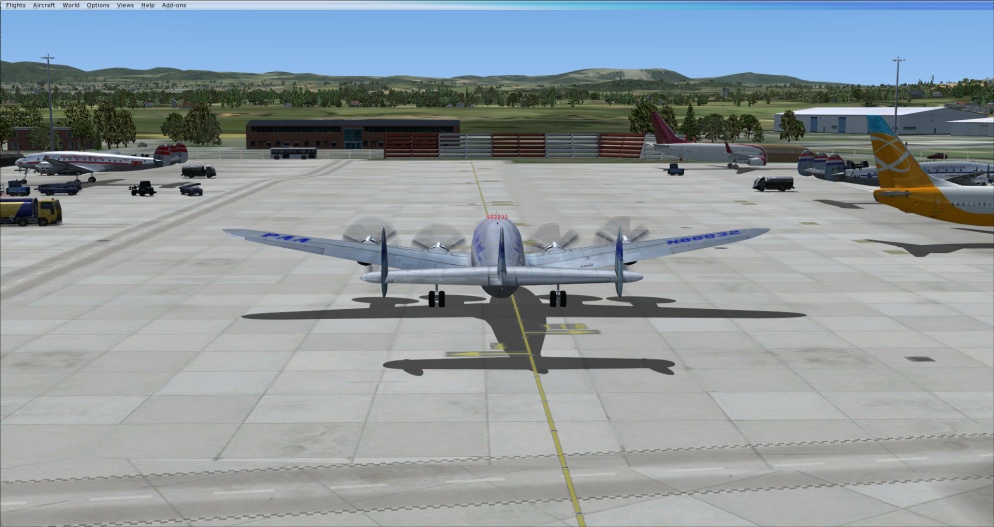 During this period all aircraft were ‘Props’ and I flew several more types , however time to move on and get some jet experience. One of the first as pictured below, is the Bae -146 in the company name before getting the company standard ‘Blue’ texture. Not a bad aircraft to fly and clocked up quite a large number of hours on this four engine aircraft. The aircraft was able to land on some of the shorter airfields and in real life was not that noisy.

Before we move on you will see a couple of King Air 350i – Beechcraft. The Beechcraft King Air 350i rules the skies with legendary performance that includes more payload, greater range and a quieter interior. This was another favourite of mine. In those days I had not tried to learn how to paint textures so they had no company names on them. 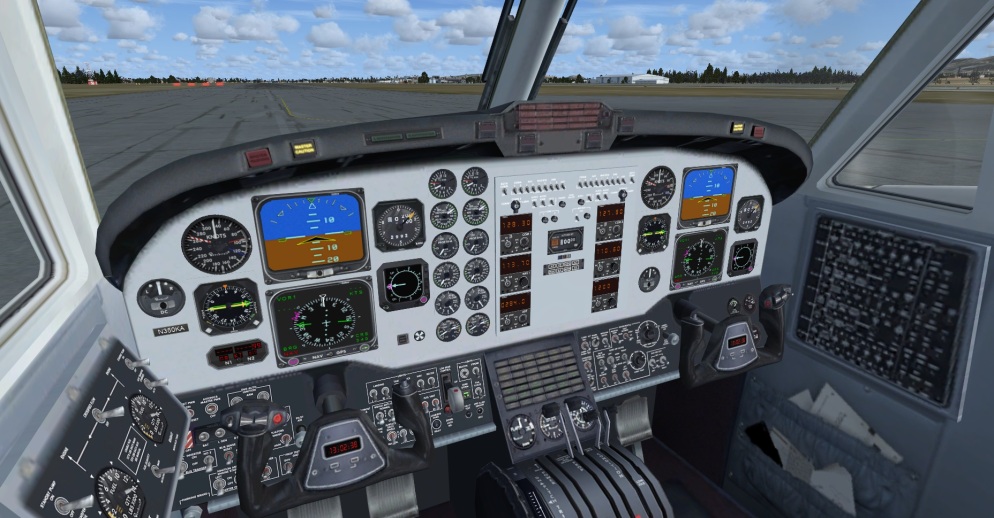 Going a stage further, and having a reasonable cash flow, I updated to the Boeing 737-400 to use with ‘Gregory Air Cargo’ and added aircraft to the company (we have 18 cargo including the new L1011-500) , ‘Tailwing Airlines’ which is based on a real life Turkish Airline (we have 10 pax aircraft). I contacted the person who painted the aircraft initially to ask if it was ok to use his textures for my passenger services and, using the same aircraft paint it in my own colours for cargo services. People like to be asked first before blasting ahead with changes… You wil see examples of both aircraft based at Edinburgh, Scotland, in the image below.

Over time the company has grown with both cargo and passenger services and it came to mind that I should add to the current aircraft another well known cargo carrier, the Lochheed L1011-500 Tristar. The Lockheed L-1011, commonly referred to as the L-1011 or TriStar, is an American medium-to-long-range, wide-body trijet airliner by Lockheed Corporation. It was the third wide-body airliner to enter commercial operations, after the Boeing 747 and the McDonnell Douglas DC-10. I very much like the cockpit layout which is NOT a glass cockpit. I still prefer ‘Steam Instruments’.

I managed to lease 6 aircraft spending some £90,000,000 to add to the company fleet. This means hiring and training pilots before the aircraft can start to earn money. Does not take long in Air Hauler to train them. The Cockpit display is shown below:

That’s all for the moment, any further updates will be added later.

Air Hauler 2 puts you in complete control of your own freight and passenger company – take charge of operations both in the boardroom and in the cockpit. You can also ‘go global’ and create your own Virtual Airline and recruit other AH2 pilots to fly for you with attractive pay-outs, or you can join another pilot’s booming airline and fly for that alongside your own company.

The main image at the top of the page shows both Cargo (Gregory Air Cargo) and Passenger (Tailwind) aircraft at their home base of Edinburgh (EGPH) Scotland. Tailwind was designed by EpremSoft, the Cargo fleet (designed by myself) are Boeing 737-400. Tailwind is based on a Turkish Airline.

The aircraft is based on a Turkish Airline.

This aircraft was my first attempt at creating my own airline texture.

It was now time to add a further aircraft to the company  The Lockheed L-1011 TriStar as seen below in company livery. 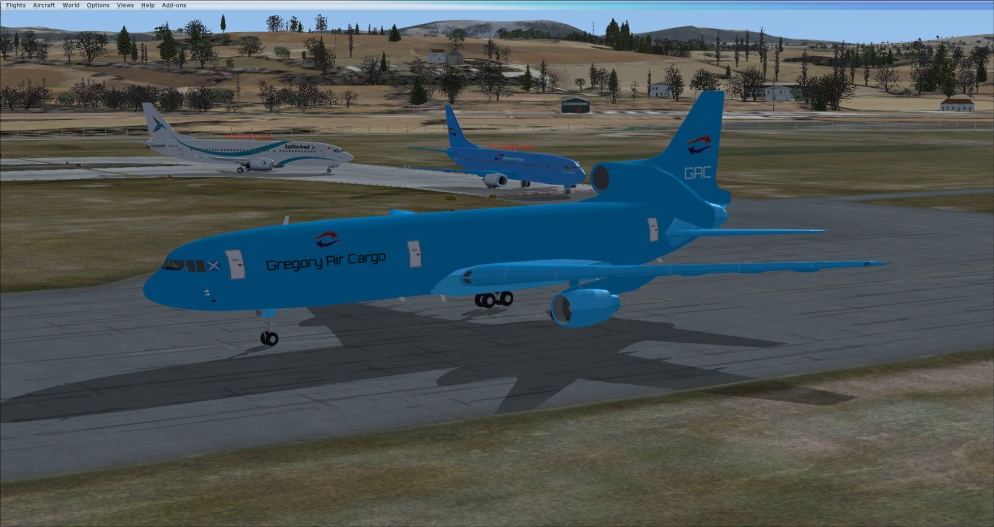 I have another online gallery at https://granddadgregory.smugmug.com/AirHauler2/
(This has yet to be updated)